FLIGHT SIMULATION: HOW DID WE GET HERE?

Imagine the look on the Wright Brother’s faces if they realized the current state of the industry they once were the pioneers of. Now, envision their reaction if they had been told any regular person in the planet would be able to feel the thrill of being airborne across every corner of the globe without really moving. Astonishing, isn’t it?

Did you know that before flight simulation boomed, pilot students would practice elevator control by making their aircraft do small “hops” along the runaway whilst being taxied until eventually achieving flight through longer “hops”? Think about what would occur if nowadays, some flight school taught using this bizarre method. Absolute Chaos. Not only would this procedure be inappropriate to get familiarized with aircraft control surfaces but highly dangerous. Since inexperienced student pilots jumped into aircraft with their instructors to learn theght from direct instructions from instructors in-flightMany lives were also lost because flight was tought Now, pilots can easily train at home and gain confidence, obtain realistic feedback, and practice critical situations such as engine-out without any risk before hopping into an actual airplane.

What was referred to as flight training before the 1930s nowadays could not even be referred to a simple briefing. Pilot students would initially fly with an instructor several times before touching the controls and then instructors would simple give instructions in the actual flight. A novice pilot, Henry H. Arnold, ten days after starting instruction stated to having “made twelve flight[s] by myself. My instruction under the personal supervision of the instructor in the machine is finished and from now on all my flights will be made alone for experience”. This lack of training and safety lead to many deaths of both skilled pilots and young students, and was obviously a problem that the introduction of flight simulation tackled. Before individuals could recreate the cockpits of airplanes and fly from their homes with certified simulators such as Virtual Fly’s DUO PRO, the flight simulation industry had to go through a tremendous evolution. Everything started in the 1930s with the Link Trainer, an instrument trainer developed by Edward Link which had more resemblance to a toy than to anything else, as seen in Figure 1. This device could be used to practice instrument navigation and responded to pilot’s response to pitch and roll, but was initially deemed as not useful for practical training because it visually seemed too simple, plus the fact that mostly theme parks bought it initially for amusement did not help. Following the death of 12 pilots in 1934 due to inexperience with Instrument Flying Conditions (with adverse weather conditions), the Link Trainer finally gained the trust of the US military, with 6 Model A Link Trainers arriving in 23 June 1934 and many more in the upcoming years. This device eventually helped train over half a million allied pilots during the Second World War. 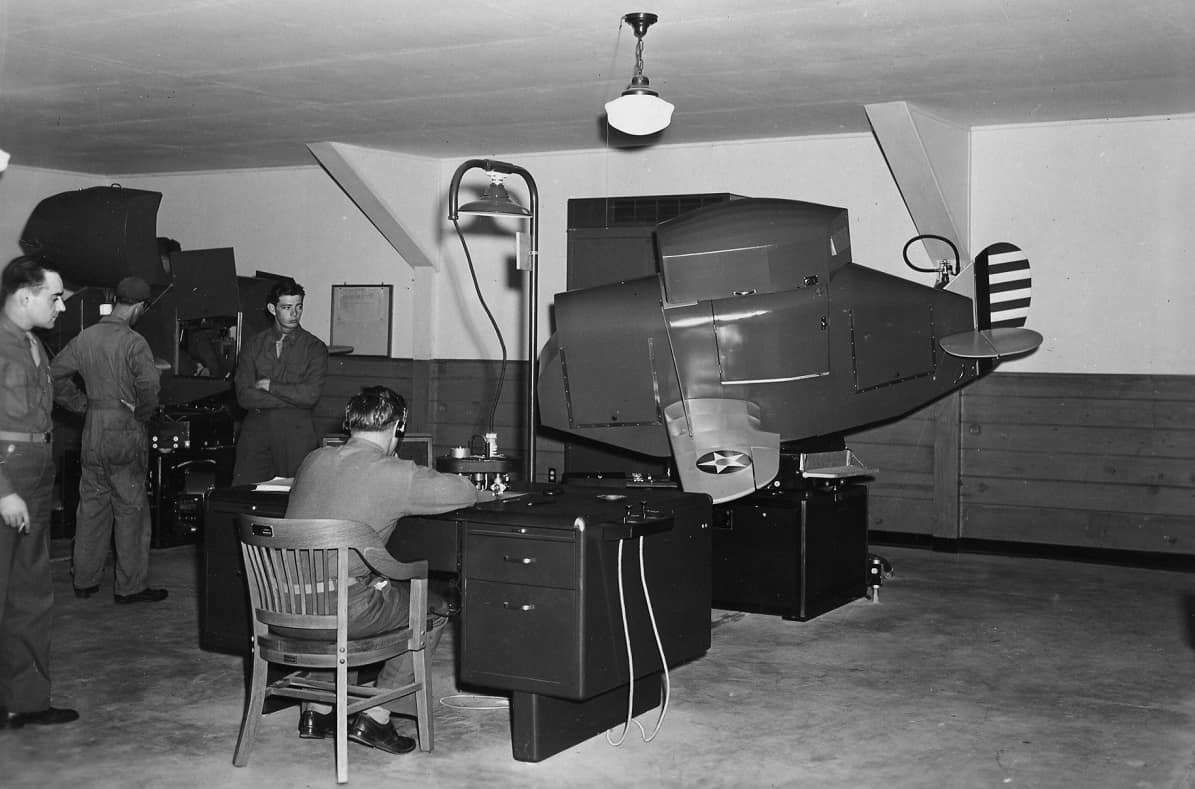 The evolving computational technology of the 1960s enabled the implementation of the Equations of Motion into simulators. This was a crucial stage, since these equations mathematically describe the motion of aircraft during different phases of flight due to aerodynamic effects, loads or external disturbances due to weather conditions for instance. These slowly enabled more realistic simulation experiences up to the point that, nowadays, the term “Zero Flight Time Training” has risen, which describes a type of pilot training which fully occurs on a D-level full simulator (the highest rating). But there are tens of Flight Simulator levels. Such as the AATDs. An example of these simulators is the DUO PRO Flight Simulator, shown in Figure 2, which can recreate realistic in-flight movements in pitch, roll and yaw thanks to its 2 to 6 Degree of Freedom platform and through the controls of the pilot with the yoke “YOKO +” and rudder pedals “RUDDO +”. 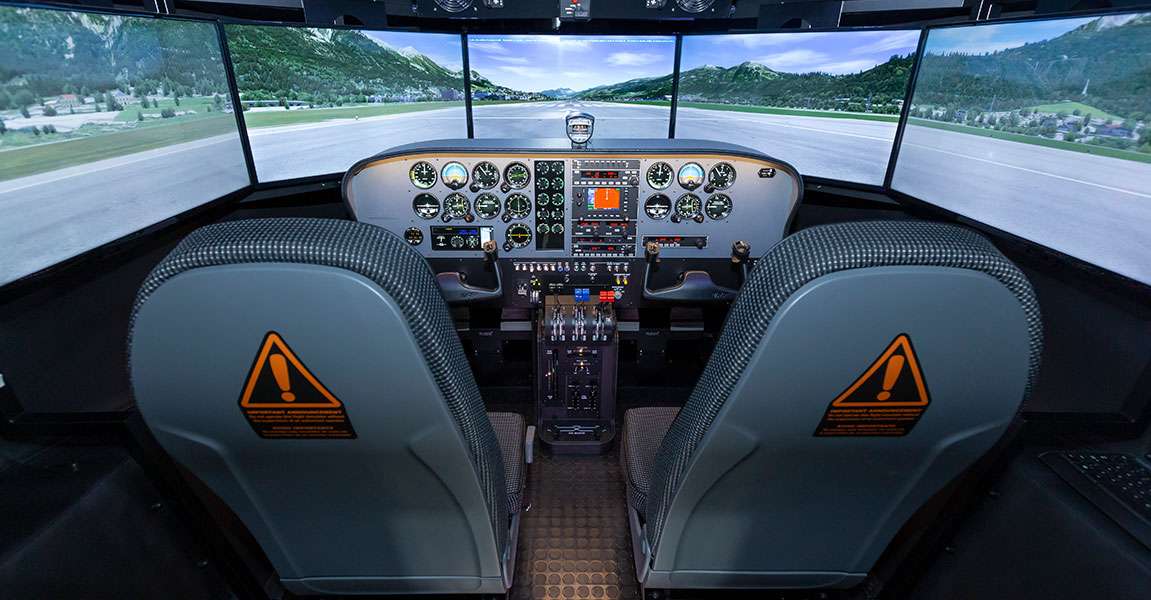 A vital contributor to the success of flight simulation is, as you probably know, Microsoft, and launched in 1982 the first version of its flight simulation software, the MSFS 1.0. Although this version nowadays is something of a headache to look at and interpret what is going on in the screen, back in the day it quickly became a popular flight tool which some claimed “[it] actually turns your IBM PC into a Cessna. The thrill of flying becomes a reality” (1). What would this person say if it saw the following 15 versions that Microsoft has launched of this simulation software? If you take a second to compare the latest MSFS 2020 version (Figure 4) to the first MSFS 1.0 version (Figure 3), the contrast is unbelievable. This summer, simulation enthusiasts flying across the United States were able to fly through Hurricane Ida in-game MSFS2020 thanks to its live weather mechanics. If you stop to think about it, it is truly amazing how far we’ve gone and how much more awaits us in this constantly-growing sector.

Although flight simulation was initially intended to train pilots, this technology, as many others, has been increasingly available to the wider public, which enjoy this experience to disconnect from their daily routine. Due to this, much more simple simulators have been developed by the industry, which can easily be flown from a small room at every household. Independent flight controls such as Virtual Fly’s yoke “YOKO PLUS” or the Throttle Quadrant “TQ6 PLUS” can easily be connected to personal computers to virtually take off anywhere you desire, without the need to set up large simulation stations, and can help pilot students familiarise themeselves with these basic controls.

The widely known myth of Icarus and Daedalus tells the tragic story of an inventor and his younger son that were captive in an island. The father, Daedalus, realized that the only viable escape route was through air, and used his imagination and skills to come up with two wings made up of branches and wax. These enabled both father and son to escape, but Icarus, enthusiastic and foolish, did not follow his father’s advice on not flying high to avoid the Sun, and saw his wings melt, resulting in his death. This myth has always served to praise caution and rational thinking over sentiments and irresponsibility. However, I wonder what the outcome would have been if Icarus had previously trained in a flight simulator. We’re thinking the same, aren’t we?